Preparing your schools to be Strike-ready

by CORE: The Caucus of Rank and File Educators
on August 25, 2019
PREPARING FOR A STRIKE AUTHORIZATION VOTE:
I’ve been a strike captain and contract action team leader for 3 strikes (2 public school & 1 charter school). Since my most recent strike was the charter strike, I want to talk about why we were successful (I did these same actions preparing for the cps strike too). To note, hopefully public school teachers won’t have to strike, but we probably need a strike authorization vote.

Here’s how we were successful:
1)We built strong CONTRACT ACTION TEAMS (CAT) that were diverse in race, experience, subjects taught, grade levels, skills, which cliques they connect with, etc.

2) We created personal EMAIL LISTERVS where we started emailing articles about other successful strikes, upcoming actions & had debates around the strike vote

3) We made PHONE TREES to contact members about coming to union mtgs, about important votes, & during the strike, we called every single person every night so we could answer questions & hear any wavering in their voices

4) We INCREASED TURNOUT TO UNION MTGS by using our phone trees & email listserv, ordering food or having potlucks, posting notices of the union mtgs with the agenda on the time clock, teacher lounge & bathroom stalls. We also asked ppl for input on the agenda first in email. We also held multiple mtgs in 1 week so everyone could make a mtg.

5) One of our first union mtgs, we had an ORGANIZING CONVERSATION WHERE THE STAFF CAME UP WITH THE ANSWERS. We started off by asking what are the problems, what do we want, who are the enemies and our allies. Then we asked the staff, how do we win these things. The staff came up with the answers on escalating actions, talking with parents, etc. We asked them, “Why do we wear red? How does it help us win our demands?” -unity, shows our strength to the boss, etc

6) We TRACKED 1 on 1 CONVERSATIONS with all our members on a google doc. Each CAT leader had about 5-10 members who they spoke with, gave updates, etc. They also met with them and asked them questions about what did they want on the contract, how they were feeling about a possible strike vote and eventually how they would vote in the strike. If they were on the fence, we had multiple ppl talk to them, that were close to them.

7) We showed POWERPOINTS during our union mtg that showed what we are fighting for, the current climate, what unions have won around the country & why we need to take a strike authorization vote. Right before striking, we made a different PowerPoint about why we need to strike. We held these UNION MEETINGS OVER MULTIPLE DAYS AND TIMES so everyone could make a mtg.

8 ) We made about 10 FLYERS FOR STAFF explaining our different contract demands & encouraging them to vote yes to the strike authorization vote.

9) We also made FLYERS in Spanish & English FOR PARENTS. The flyers included issues, demand and a call in number to the ceo. We flyered in the am and pm outside about 10x before striking. You could split up the flyering days/times by department or grade level

10) We held CALL IN DAYS and made memes of our CEOs. We also had Twitter storms or social media storms where people spoke about our contact demands  and shared the call in memes

11) We made PETITIONS and shared the links on social media.

12) As a staff, we had large GROUPS ATTENDING BOARD OF EDUCATION mtg. Multiple parents, teachers & students from our schools spoke at these mtgs. When they refused to let us all in the board of Ed mtg, we ALL OCCUPIED THE LOBBY & HELD A COMMUNITY BOARD MTG IN THE LOBBY.

13) STUDENTS ALSO GOT INVOLVED. They organized themselves by occupying the cafeteria for hours and demanding to speak to the CEO. They started a social media student group to share info. They also came to the rallies

14) We held INFORMATIONAL PICKETING AND RALLIES outside our school

17) One day we REFUSED TO GO TO PD and instead our whole staff went to bargaining and asked questions. It made them very nervous

18) Some teachers held SPECIAL EDUCATION KNOW YOUR RIGHTS TRAINING for staff and parents. When parents knew their rights, they fought for their students with IEPs and support our special ed contract articles

19) We held a FORUM FOR PARENTS with teachers, students, the alderman, parents and community members speaking. People spoke about the reasons to teachers are striking & for everyone to support the strike. We live streamed the forum too.

20) Before the strike authorization vote, we held a ballot MOCK STRIKE VOTE to see what percent of staff would vote yes.

21) When we struck, we assigned ppl roles. We were also CREATIVE on the picket lines. People brought instruments, music, we did like dancing. Ppl brought food and coffee. We had ppl in charge of signing and chants. We had a sign in sheet. If ppl were late or didn’t come, we called them. We assigned ppl to speak to the media and made sure we were all on the SAME MESSAGE.

22) On strike, majority of the staff went to the AFTER PICKET LINES RALLIES OR ACTIONS. We knew that the more pressure we had on them, the shorter the strike would be.

23) During the strike, we did CALL IN days everyday to the CEO & others and asked each member to share call in memes with at least 20 family members and friend

24) Almost EVERY MEMBER WENT TO THE AFTERNOON ACTIONS & RALLIES. We told members that if they wanted a shorter strike, then we needed all members on board for attending the afternoon actions. The stronger our actions are, the more leverage we have at the bargaining table.

25) We held late afternoon mtgs with members, where we DEBATED THE OFFERS ON THE TABLE & whether we wanted to accept them

26) And most importantly, UNITED TOGETHER and fought the boss, not each other!

The first week of school, start organizing your contract actions teams, so we can show our power and unity to be strike ready and win a strong contract!

After Years of Struggle CTU, IEA, IFT and Raise Your Hand abolish the Charter Commission!

Great work Team! Restoring democracy in our schools throughout the state of Illinois.

COREs own Gabriel Paez did a beautiful job connecting sanctuary to our contract in this WBEZ piece for those who haven't seen it listen here.

Linda Perlaes threw down last week at the indivisible rally at Lipinski's office and connected dots for everyone to overwhelming applause. The demands for a strong contract and sanctuary schools are deeply connected and linked to CORE and CTU's efforts to address social, economic and racial inquiry in our schools and the city.

CORE Wins! Now time to fight for the schools we all deserve! 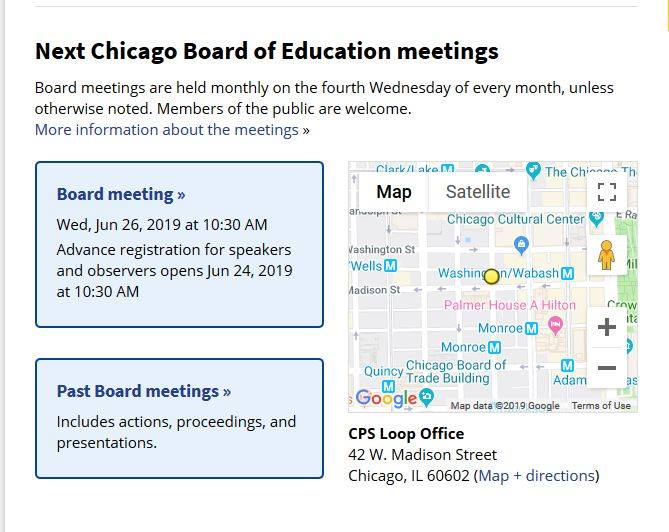 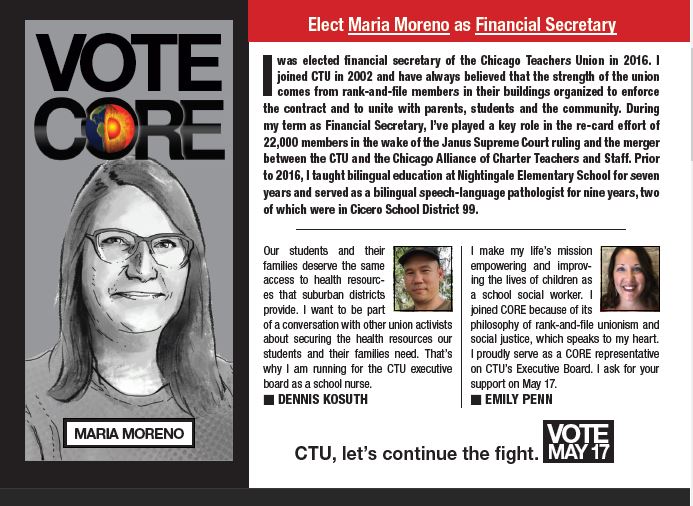 History and Strength of CORE 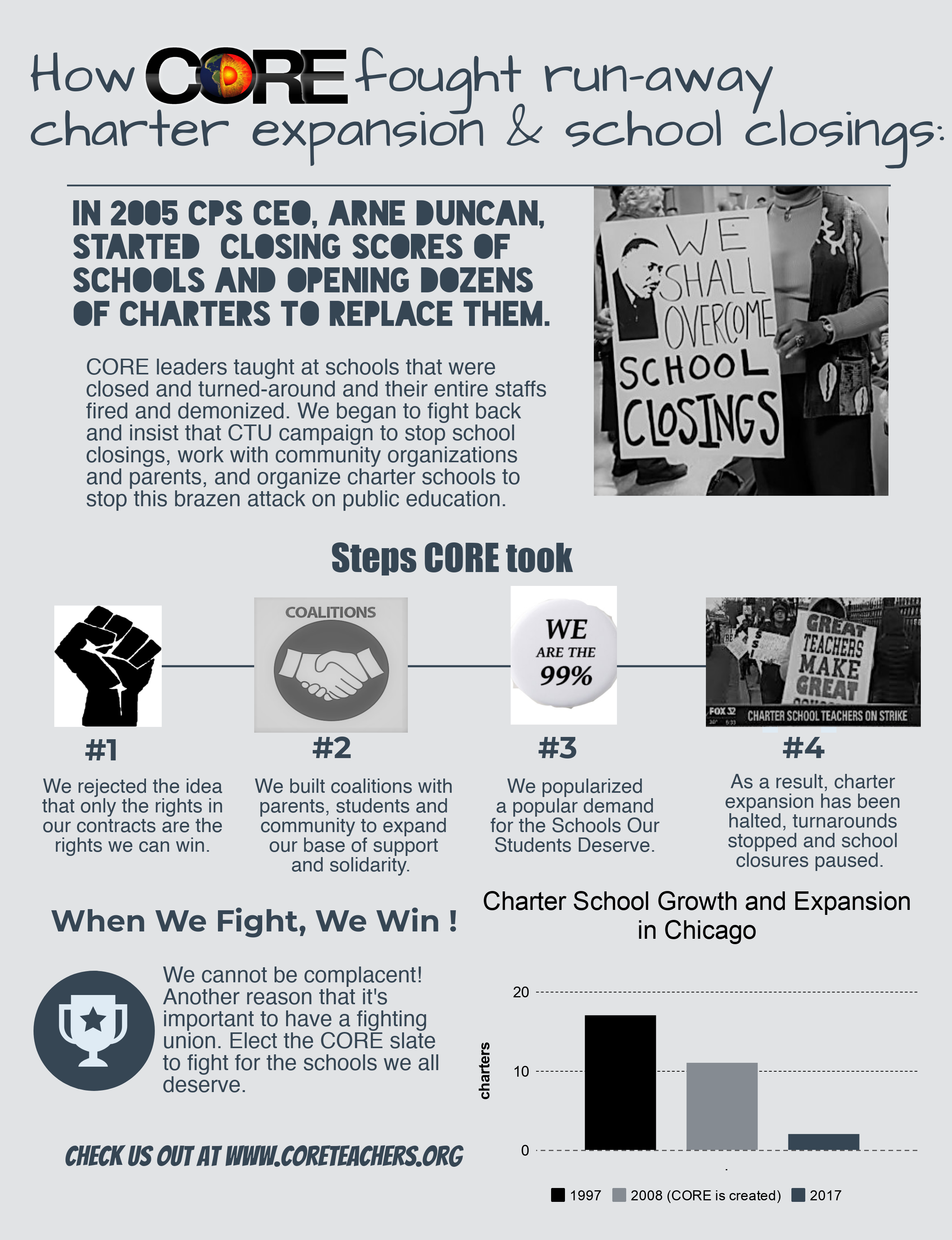 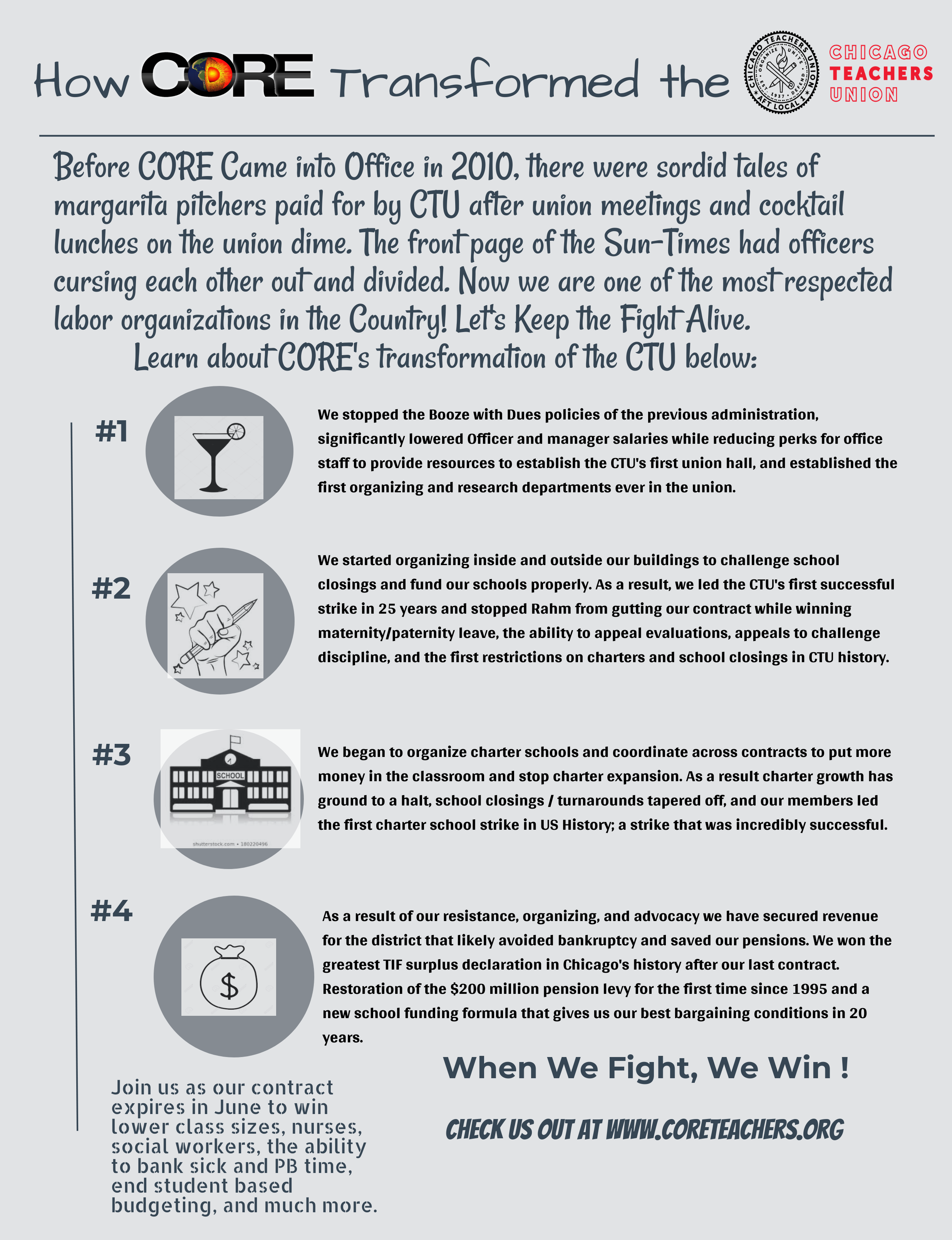 Learn about Our Officer Candidates 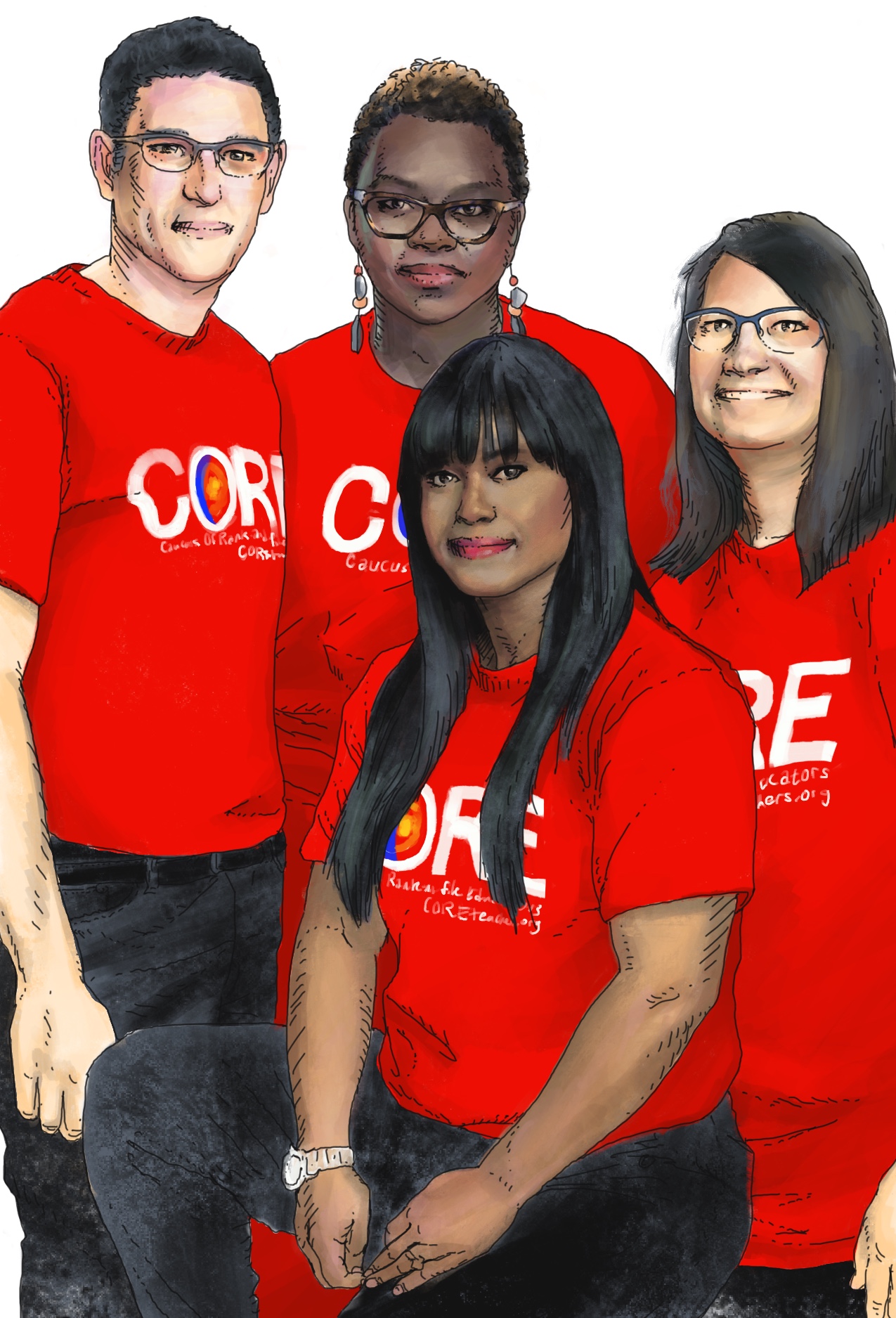 Elect a Dynamic CORE Ticket for a Fighting Union! 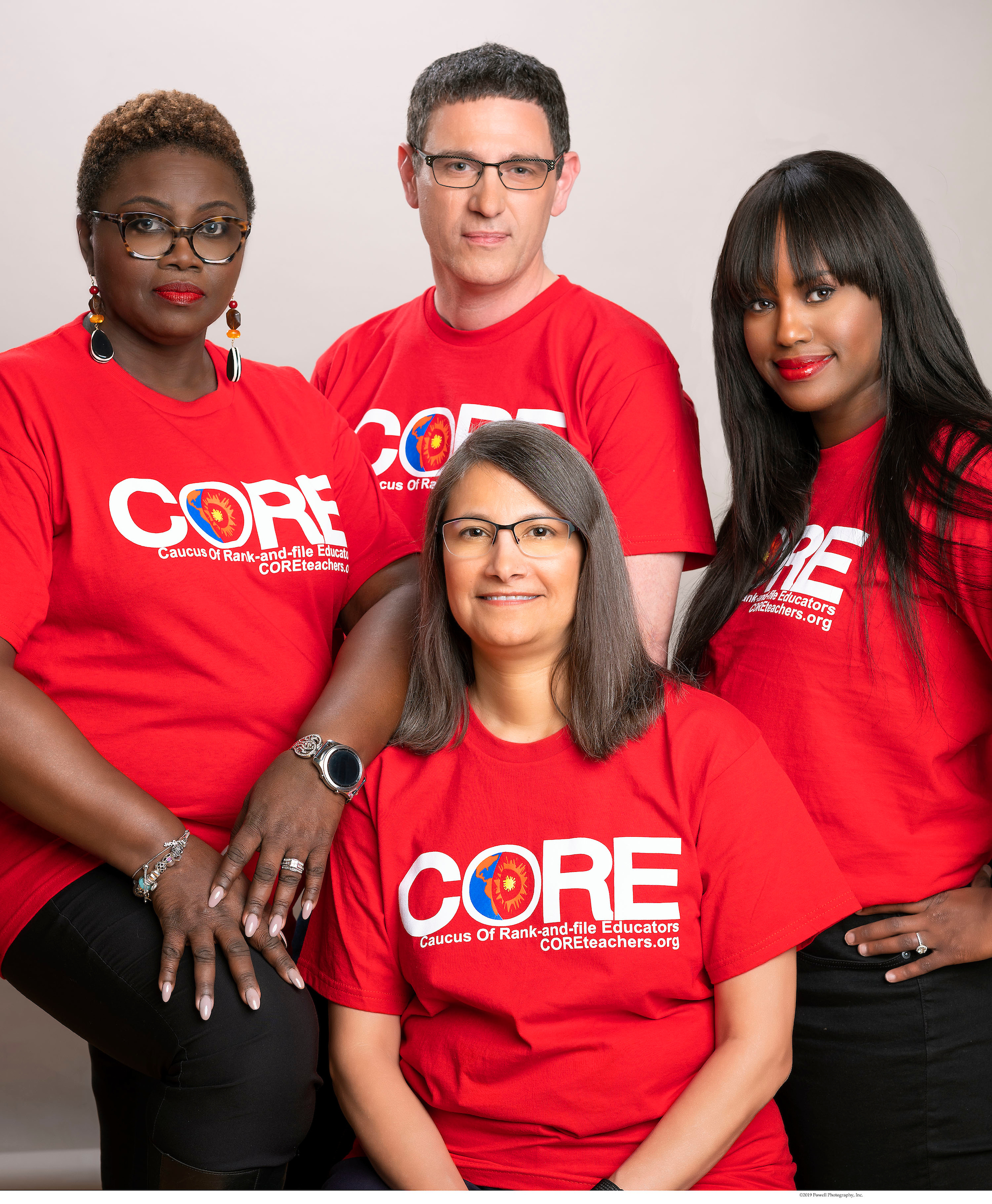 If you are a CORE Candidate for our 2019 slate, get your basic information here

The Common Core of Goodwill by Michelle Gunderson

CORE's Michelle Gunderson published this article in Living in Dialogue 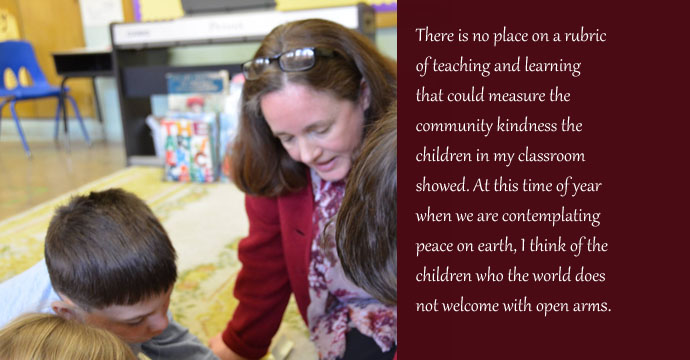