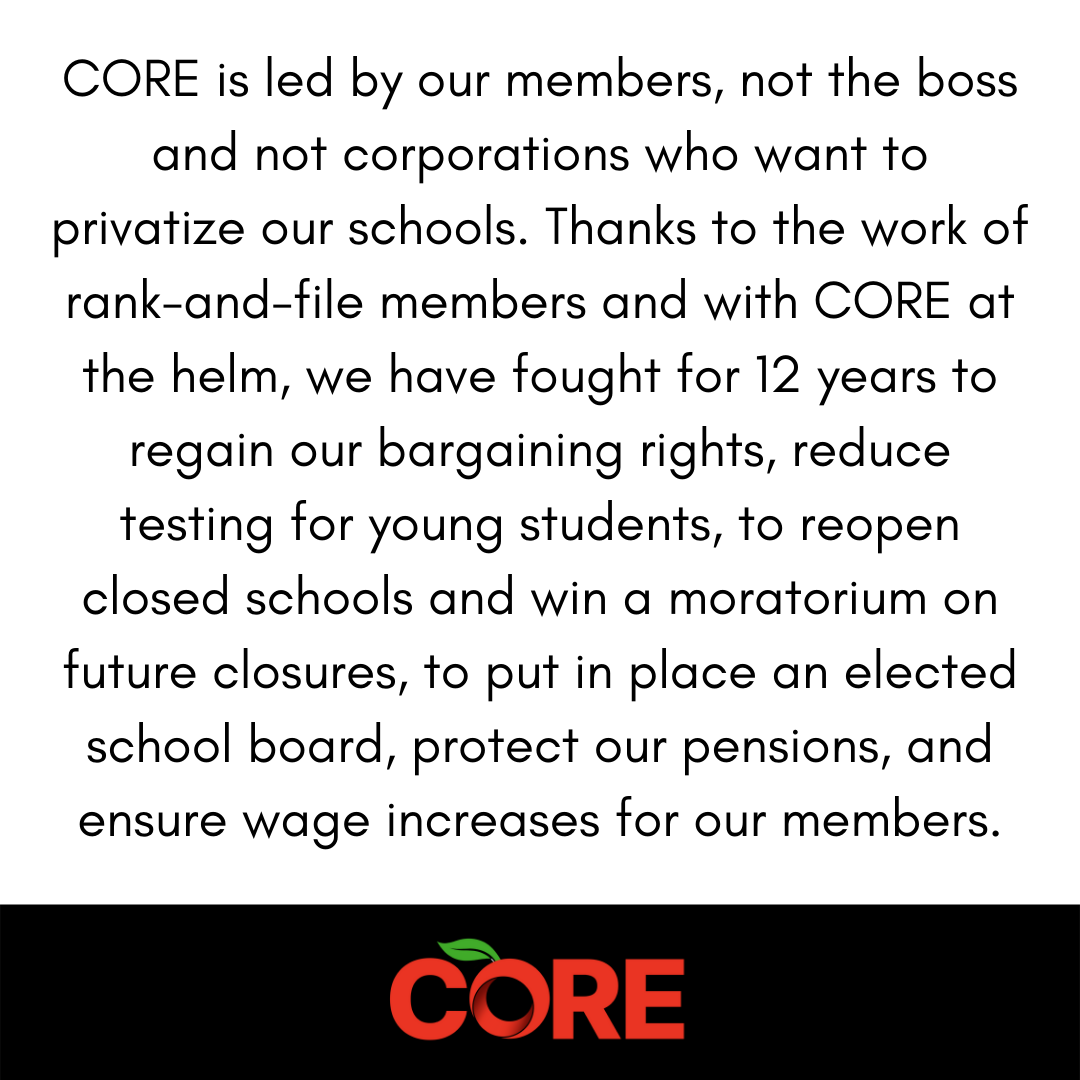 On Thursday, the Chicago Teachers Union filed a lawsuit against outside organizations seeking to influence our internal union election. CORE applauds this action and thanks CTU for their leadership on this. Union elections need to be democratic, fair, and void of interference from bosses or other entities. This is the law.

What's at stake is who is going to be sitting on CTU's side of the bargaining table when we negotiate our next contract in two years. If this interference is allowed to succeed, here's who will be determining the future of our schools, our work, and our students.

Instead of having a thoughtful, explanatory response to the lawsuit or committing to not take further money and help from Chicago Teachers United,  the Member's First caucus resorted to personal attacks and name calling, rather than declare they would not engage with Chicago Teachers United or Lisa Schnieder Fabes.

There is no eluding this connection with Lisa Schneider Fabes and the implications of her actions. The mayor is using her allies to try to break our union from the inside. Fabes’ husband worked closely with the Commercial Club of Chicago to close schools and privatize our system under Rahm Emmanuel. In 2013, right on the heels of our historic strike, the Board of Education closed 50 schools. They destroyed the working lives of educators, disrupted the education of our students, and gutted our communities. These efforts disproportionately affected Black members of our union, eliminating jobs of veteran teachers who lost their livelihoods.

Under mayoral control, the mayor is the boss. The mayor is using her allies to try to break our union from the inside.

The lawsuit helps us have a period of discovery where light can be shed on all of this.

We’re also watching another caucus emerge, funded by the same privatization hawks who have menaced the stability of our schools for years. Change the Conversation is supported by Educators for Excellence, an organization funded by Bill and Melinda Gates in support of charter expansion, privatization of public schools, the “test to teach” philosophy, and technology-based individualized education.

They come into our schools offering “free lunches” and host a conversation about education policy but they don’t engage our rank and file members as leaders with their own solutions. This is a wolf in sheep’s clothing game.

The true mechanism for effecting change in education policy is OUR UNION. Their goal is union busting.

Change the Conversation has received very little member support or recognition. Even so, the CTU lawsuit sends an important message. We will not tolerate education reform non-profit organizations funded by billionaires interfering with our elections.

CORE is led by our members, not the boss and not corporations who want to privatize our schools. Thanks to the work of rank-and-file members and with CORE at the helm, we have fought for 12 years to regain our bargaining rights, reduce testing for young students, to reopen closed schools and win a moratorium on future closures, to put in place an elected school board, protect our pensions, and ensure wage increases for our members.

The forces against us are well-funded and well-connected. CORE knows this, and we know that we have to fight for every single gain we have ever had in our schools and city.

Our mayor and outside anti-union organizations want to put leadership in place that will “play nice” at the bargaining table. That is why we need proven, member-led fighters who are committed to public education, our members, and our students.

CTU was compelled to file this lawsuit because despite our House of Delegate resolution against outside influence, violations of the laws governing our election procedures continue.

This is not just about the CORE caucus, but every single member of CTU and our ability to move forward without outside influence of those who work against us.