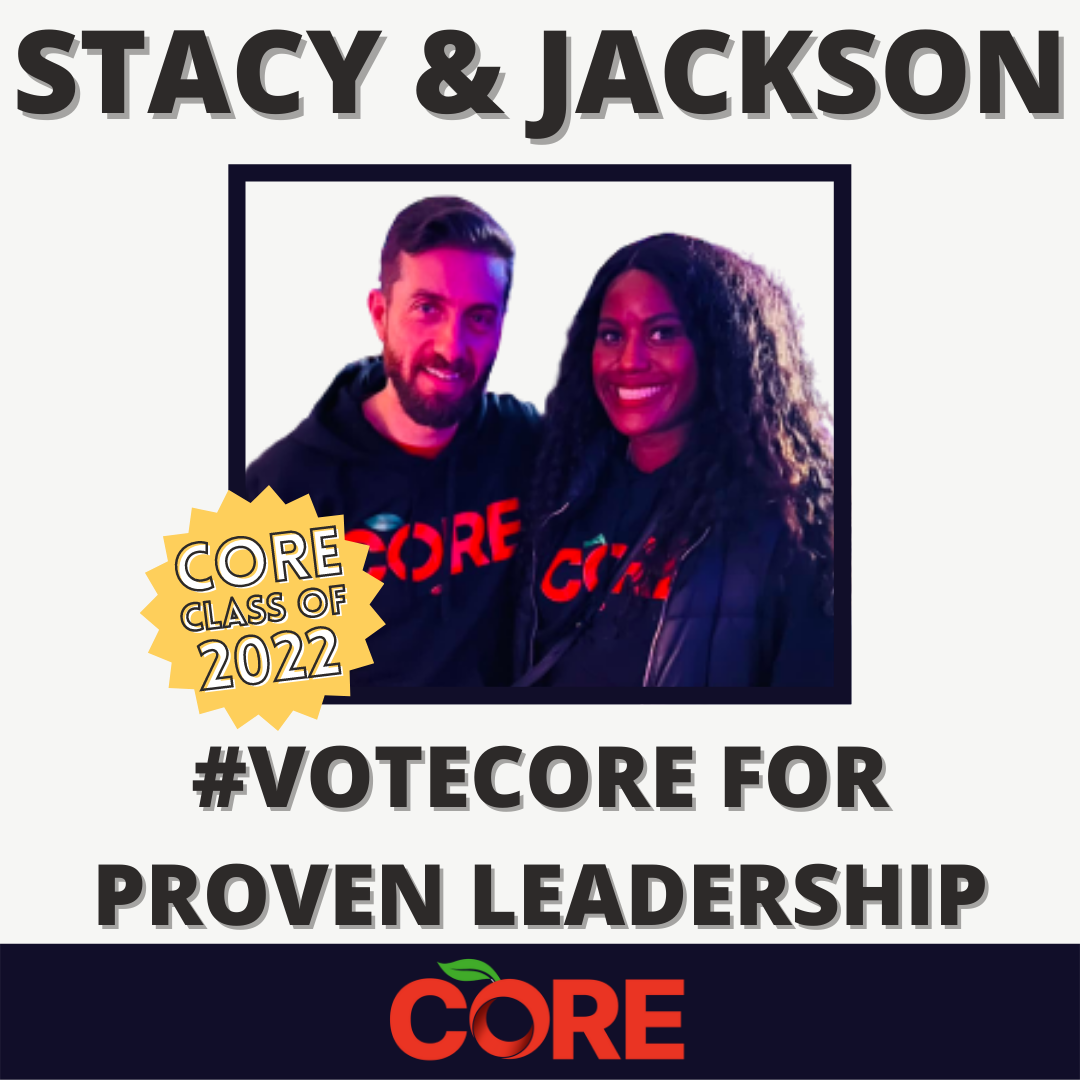 The Top of the Slate

Upon the introduction of Stacy Davis Gates, the hall erupted in applause and cheers that would not be matched by any other candidate. Davis Gates provided the highlights of the night by describing CORE’s considerable accomplishments and reiterating that CTU will need to address structural inequality in our schools and communities to make the lasting changes we all deserve. “You cannot advance love and progress without a lens of justice and equity,” she said.

She described how CORE’s commitment to the nation’s first charter strikes and merging with the charter local has led to higher teacher pay across the charter industry while reducing administrative bloat and expansion. Davis Gates also cited the addition of steps and lanes for PRSPs for the first time in the 2019 agreement. “We can do bread and butter, but the whole buffet is available for us,” she said, going on to list a massive range of working and learning conditions now formally open to collective bargaining after CORE led the fight to restore our full bargaining rights.

Whereas presidential candidates for Members First and REAL offered individual, simplistic solutions to stem the tide of Black teachers leaving or being removed from the system, Stacy Davis Gates provided concrete programming, policies, member initiatives, and CTU staffers who work to address the precipitous loss of Black educators every day.

The REAL officer slate represents the first time since 1957 that two men would lead an organization that is 85% women, and their statements at last night’s debate showed a concerning trend of minimizing the experiences and contributions of women in our union. Darnell Dowd, running for President on the REAL slate, claimed to be the only elementary school teacher running for a leadership position, ignoring CORE’s candidate for Financial Secretary Maria Moreno’s seven years experience as an elementary teacher at Nightingale Elementary.

REAL candidate for vice president Joey McDermott talked about an alleged decrease in engagement, excitement, and participation in political efforts among members. In reality, the last decade has seen hundreds of CTU members run for office, lead campaigns, volunteer, and donate to elect better leadership in their communities. McDermott also complained that the same political donations he laments as diminishing are simultaneously too high. Seemingly, McDermott accuses CTU–especially the women who most often lead this work–of being both too ambitious and not ambitious enough. Meanwhile, he insists that a few more Field Reps will fix the exodus of Black educators. Our grievance department is strong, but grievances alone do not solve the problems we face.

In a union of 85% women and in a district that represents over 90% students of color, we cannot elect leadership who erase our members’ expertise, work, commitment, and experience, while unable to name concrete ways they will support Black educators.

Beyond Winning an Elected School Board

CORE provided a clear explanation of the critical issues as we approach our city’s first elected school board, as well as how the Chicago Teachers Union would participate in this historic moment for Chicago and its schools. Meanwhile, the other candidates offered no vision for the 2024 election, did not seem clear about what is at stake, and continued to downplay the importance of our organizing and political outreach.

Jackson Potter, CORE’s candidate for vice president, described specific opportunities and challenges ahead to address the harms of student based budgeting, over-testing, TIF surpluses and property tax levies, in addition to the role of the Board in authorizing existing and future charter schools. By contrast, opposing candidates for vice president rotated between rambling stories and vague platitudes. We heard no concrete solutions to match the complexity of the challenges teachers face.

When asked to elaborate on how the caucuses would approach their relationship with the Mayor, Members First candidate for president Mary Esposito-Usterbowski said, “I am a fighter. I know how to work together,” and continued with a baffling claim that the Mayor has not championed public education because she is unaware that students are dealing with gun violence and simply needs to hear this from teachers.

Democracy and Integrity in Our Union

The candidates for Members First and REAL repeatedly argued that the union did not consider, include, or represent members properly, but neither caucus provided salient details about what they could have done differently or better. CORE candidates pointed out that the real culprits for many of our toughest moments in the last few years were the pandemic, bosses, and billionaires – not each other. Stacy Davis Gates explicitly called for reflection, grief and trauma support, and other restorative practices for our members to help CTU move forward from the immense challenge of surviving and teaching through this pandemic.

At one point, Darnell Dowd, presidential candidate for the REAL caucus, praised REAL for forming only two months ago in barely enough time to get on the ballot. He went on to compare himself to President Emeritus Karen Lewis, suggesting his lack of experience matched hers when she was elected in 2010. However, he failed to mention that Karen was a 15 year delegate, sat on many committees, went through the union’s NBCT program, and represented high school teachers on the CTU Executive Board. CORE also built its caucus over two years before seeking leadership positions in CTU. Despite the comparison, Darnell has never participated in a CTU committee and became a delegate for the first time three months ago to help his slate electorally. Dowd expressed “hope that our work lives could be better,” while Davis Gates and Potter laid out a program that “represents one of the most successful labor organizing projects that we’ve seen in a generation, and we have only just begun.”

The contrasts were clear

Last night’s candidate forum spotlighted the energy, capability, and readiness of CORE’s candidates. CORE is multi-generational. CORE is multi-racial. CORE is a caucus of tech coordinators, clinicians, librarians, paraprofessionals, and teachers. And we have proven success and specific plans to lead our union forward.