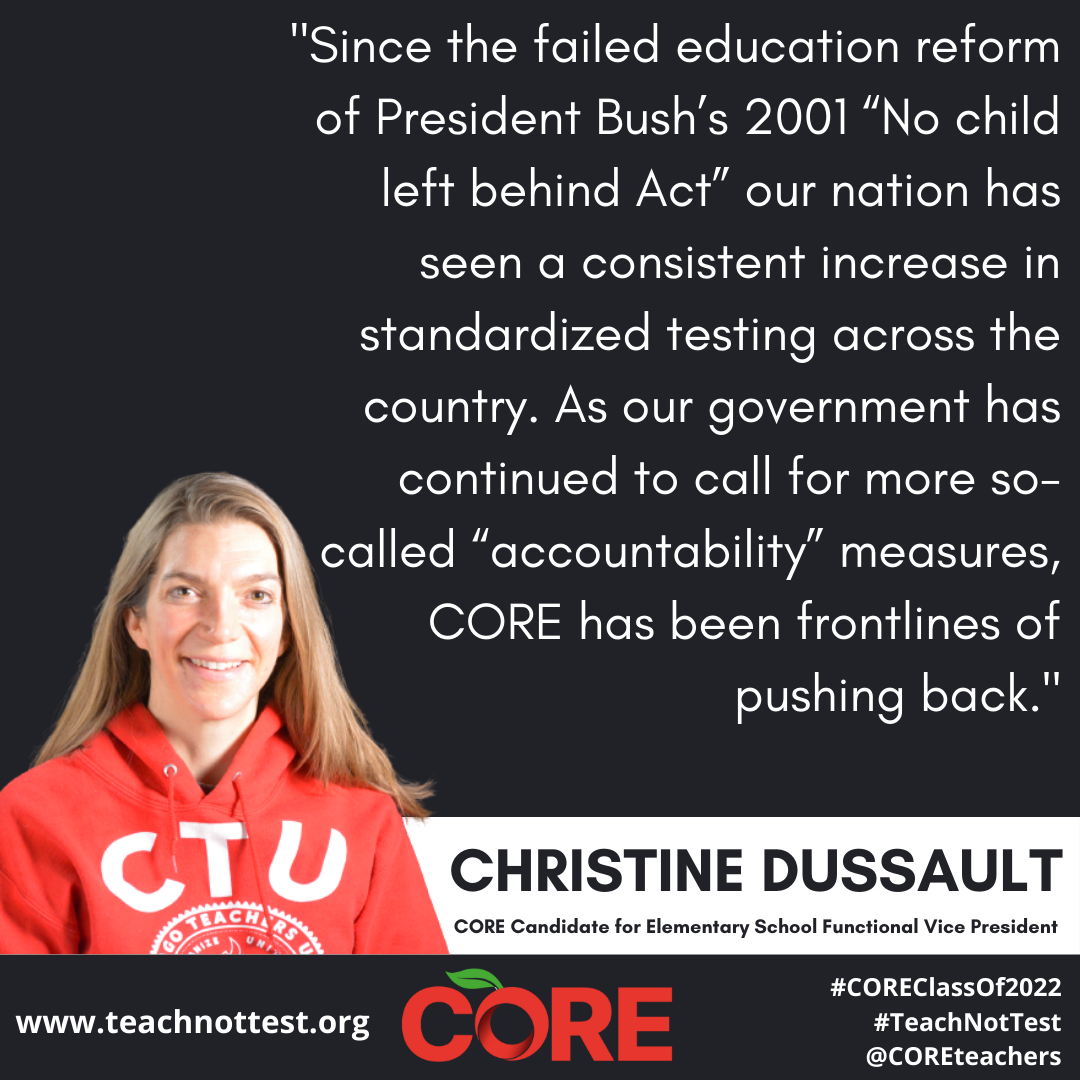 Since the failed education reform of President Bush’s 2001 “No child left behind Act” our nation has seen a consistent increase in standardized testing across the country. As our government has continued to call for more so-called “accountability” measures, CORE has been frontlines of pushing back. A few years ago CORE members were at the epicenter of the opt-out campaigns, and we have consistently pointed out the racist and punitive nature of current assessment practices.

The CTU Testing Committee jumped back into action in February 2020 after the OIG revealed several instances of cheating with the MAP NWEA test. At that time, several CORE members, including Josh Lerner and Aaron Bingea quickly gathered several concerned CTU members to reignite the Chicago Teachers Union Testing Committee. However, our efforts to question the district’s decision making quickly were sidetracked in March 2020 by the Covid 19 Pandemic. Since that time, we have continued to look for opportunities to push back on the draconian testing.

Since last May, under the leadership and vision of Dr. Monique Redeaux-Smith, CORE members Paula Barajas, Aaron Bingea and myself  joined a coalition with the IFT, Illinois Families for Public Schools, Raise Your Hand, Learning Disabilities Association of Illinois, and the Center for Urban Education Leadership to challenge the increases to standardized testing that the Illinois State Board of Education was proposing. ISBE wanted to increase the frequency of required standardized testing for students in grades 3-8, and they even were considering expanding it to grades K-2. Check out https://www.teachnottest.org/ for more information.

ISBE argues its test design will increase “equity” because the state will provide districts with access to a widely used, commercial interim assessment system, but in reality, ISBE will be putting state dollars toward giving greater access to ineffective testing tools. This is expected to cost $228 and could lock us in for ten years. Black and Brown students are severely impacted by current state testing regimes, and the model ISBE is pursuing will increase these negative impacts and do nothing to provide meaningful, culturally responsive learning experiences. Due to the efforts of this coalition, ISBE may not actually go forward with this plan. We will not take our foot of the gas until this campaign is over!